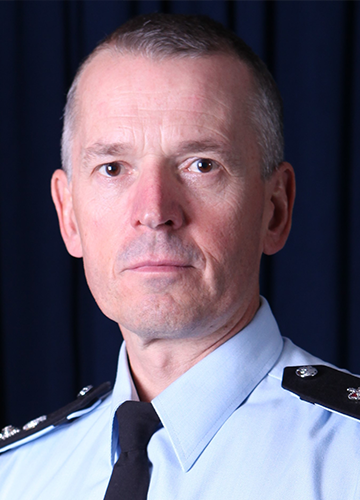 Rob joined the Australian Federal Police in 1984 and was stationed at the Melbourne Office where he performed numerous investigative roles. In 1989, Rob was deployed to the United Nations Peace Keeping Mission in Cyprus and upon returning to Melbourne in 1990 was involved in a number of organised crime investigations, in particular relation to eastern seaboard criminal networks and Asian Organised Crime syndicates.

In 2000, Rob was transferred to the Adelaide Office and led teams responsible for crime operations mostly relating narcotics importations and people smuggling activities. During this time Rob was the Senior Investigating Officer (SIO) for a 317 kilogram importation of cocaine into Adelaide that involved Italian organised crime and Outlaw Motorcycle Club Gangs.

Rob was the AFP Police Liaison Officer in Hong Kong, responsible for Hong Kong, Macau, Taiwan, Japan and South Korea from 2003 to 2006.

In 2007, Rob was promoted to Superintendent in command of Serious Organised Crime and Crime Operations, Perth Office. The role also included responsibility for Intelligence, Surveillance, Human Source and Child Protection Operations. During this time Rob was the SIO for a joint-investigation that resulted in the seizure of a large quantity of MDMA in Sydney and Perth and the arrest of a number of members of a Balkan Organised Crime syndicate and other high profile criminal entities. The team subsequently received a Commissioner’s Commendation for this investigation.

Rob has a Bachelor of Business, a Graduate Certificate in Applied Management (Police and Emergency Services) and a Diploma in Applied Language (Vietnamese).

Rob is married to Fiona with three children, aged 20, 18 and 16. Rob is the President of the Canberra Police and Community Youth Club and when not at work enjoys paddling his surf ski on Lake Burley Griffin, getting involved in outdoor activities such as walking and running, and looking forward to Essendon taking out the premiership in 2019.