Strengthening the Rule of Law through the United Nations Security Council: Policy Proposals

These Policy Proposals are the product of a three-year Australian Research Council-funded project on ‘Strengthening the Rule of Law through the UN Security Council’. 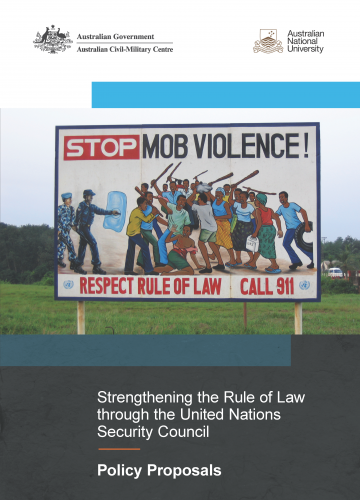 These Policy Proposals are the product of a three-year Australian Research Council-funded project on ‘Strengthening the Rule of Law through the UN Security Council’. The project is a collaboration between the Australian National University’s Centre for International Governance and Justice and the Australian Government’s Australian Civil-Military Centre. The project examined the relationship between the Security Council and the rule of law when it uses three of its most prominent tools for the maintenance of international peace and security, namely peace operations, sanctions and force. An important project aim was to develop policy proposals to enhance the Security Council’s ability to strengthen the rule of law when it deploys peace operations, applies sanctions and authorises the use of force.

During the course of the Strengthening the Rule of Law project a series of eight workshops were convened, involving highly engaged practitioners and academics. Four workshops took place at the Australian National University in Canberra and four were hosted by the Australian Mission to the United Nations in New York. Each workshop brought together a blend of 25-30 practitioners and academics who were experts and creative thinkers in the area of focus. Two hundred and twelve participants were involved across all workshops, drawn from across Australia and around the world. Practitioner participants came from various Australian government departments and agencies, as well as a range of UN Secretariat departments and agencies, diplomatic missions to the UN and non-government organisations.

The Policy Proposals presented here emerged from the dialogue and debate that took place at these eight project workshops. The Proposals are framed by a responsive approach to the rule of law, informed by the empirical research of scholars in the field of regulatory studies. The significance of a responsive approach to the rule of law lies in its capacity to generate modest but meaningful progress in rule-of-law promotion both within the UN Security Council itself and in its interventions in the diverse conflict settings that trigger its responsibilities under the UN Charter. We thank Shane Chalmers and Marie-Eve Loiselle for their outstanding research assistance with the preparation of these Policy Proposals.