The Strategic Civilian: Challenges for Non-Combatants in 21st Century Warfare 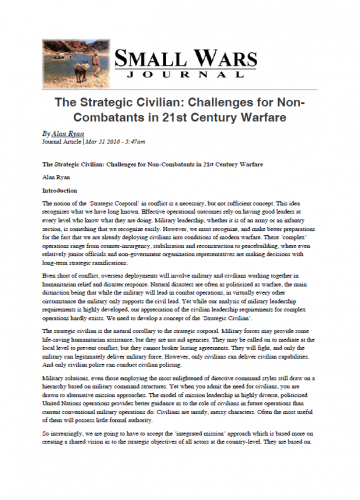 The notion of the ‘Strategic Corporal’ in conflict is a necessary, but not sufficient concept. This idea recognises what we have long known. Effective operational outcomes rely on having good leaders at every level who know what they are doing. Military leadership, whether it is of an army or an infantry section, is something that we recognize easily. However, we must recognize, and make better preparations for the fact that we are already deploying civilians into conditions of modern warfare. These ‘complex’ operations range from counter-insurgency, stabilisation and reconstruction to peacebuilding, where even relatively junior officials and non-government organization representatives are making decisions with long-term strategic ramifications.

Even short of conflict, overseas deployments will involve military and civilians working together in humanitarian relief and disaster response. Natural disasters are often as politicised as warfare, the main distinction being that while the military will lead in combat operations, in virtually every other circumstance the military only supports the civil lead. Yet while our analysis of military leadership requirements is highly developed, our appreciation of the civilian leadership requirements for complex operations hardly exists. We need to develop a concept of the ‘Strategic Civilian’.