With the exception of Papua New Guinea, the number of illicit small arms likely to be in circulation in Western Pacific island countries is not particularly large or widespread. The region remains relatively ‘gun free’ as Philip Alpers’ recently proclaimed. 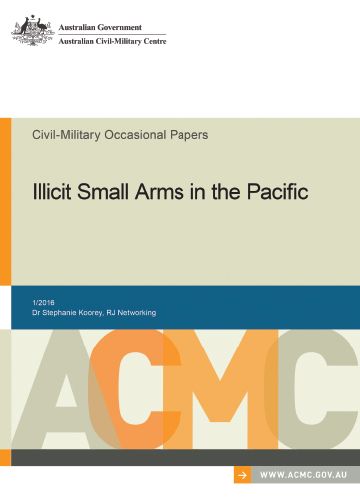 With the exception of Papua New Guinea, the number of illicit small arms likely to be in circulation in Western Pacific island countries is not particularly large or widespread. The region remains relatively ‘gun free’ as Philip Alpers’ recently proclaimed. Supply is not bountiful, controls in the form of regional and national laws are sound, disarmament and amnesties have been somewhat successful, and demand is neither strong nor state or region-wide—Papua New Guinea being the exception.

In broader context, the Pacific Institute for Public Policy points out that:

"The Pacific has seen its share of coups and conflict, but deserves recognition for being a largely peaceful region … It also has a wealth of traditional mechanisms to end conflict … It is worth bearing this in mind as the region develops a more ‘bottom-up’ approach to contemporary security issues."

The project conducted a strategic assessment, rather than a detailed stocktake, of the illicit small arms in the Western Pacific island region with a focus on Fiji, Solomon Islands and Papua New Guinea (excluding Bougainville). As anticipated, most of the illicit small arms in the region come from within the countries studied and are largely recirculated within them. However, there are pockets where weapons transgress borders, but this is not particularly organised or substantial. There are also trends with new weapons entering the region, but these are mostly imported by or with the knowledge or approval of the national governments. That makes illicit small arms in the Western Pacific island countries less of a transnational problem and more one for national governments. There are also five additional region-wide trends linked clearly and potentially to small arms proliferation. They were outside the scope of this project, but are worth bringing to attention and they are discussed briefly in this report.

International organisations and national non-government organisations (NGOs) have been at the forefront of activism and information on small arms in the Pacific. Yet after more than a decade, the Nadi Framework and Goroka Gun Summit, both grand initiatives, remain largely dormant. In part, this reflects the reality that many illicit small arms—firearms essentially—are sourced from inside the country in which they are used, and recycled multiple times within it, and that the security sector has been, or remains, both a source of supply and driver of demand. This is particularly so for the Royal Papua New Guinea constabulary.

The problems with illicit small arms in the Western Pacific are indicative of societal and governance problems and should not be seen as an isolated phenomenon. As such, this report cautions against any isolated firearms ‘fetish’  responses, or for the issues raised to be seen solely as ‘a gun problem’. As Wondemaghen noted, fears generated by media stories of armed violence ‘generates a temptation to reach for simple, often punitive solutions to multi-faceted complex problems’. As such, this report makes suggestions regarding illicit small arms control and broader, societal factors that may mitigate demand in the three focus countries.

The research indicates tangible factors are a strong driver of demand and that the ‘motives and means’  hypothesis holds true. Small arms, mostly firearms, are sourced for personal or property protection, to participate in tribal fighting, to perpetrate crime, to coerce and influence political activities, but not to create state-wide conflict or coup against an extant government. In parts of Papua New Guinea there appears to be a constant overt demand for firearms, for both the tangible reasons listed above, as well as the more intangible predilection towards wanting firearms for the status they bestow on the user. However, this avenue of research could not be confirmed in this project.

Conclusions that can be drawn from the research are that the hallmarks of the region are overt demand and supply in Papua New Guinea, reduced and low demand in Solomon Islands and Fiji, and internal supply, including the skills to build home-made firearms.

Finally, the relationship between the civilian legal market of sporting and recreational shooters and the illicit market is emotionally potent. Globally and regionally, civilian stocks are leaked onto the illicit market. However, the position of this paper is that the Pacific sporting shooters are an informed and engaged stakeholder in small arms control, and that in many cases ‘providing a path to legal firearms possession’, including its safe storage and use, can be one element of effective small arms control.