Over the past two decades, Australia has accumulated considerable experience with whole-of-government missions in complex environments, including in the Solomon Islands and Timor-Leste.

Developed to meet the particular circumstances and context of each crisis; these responses required different approaches to coordination and have brought together expertise from across Australian public service departments and agencies; the Australian Federal Police; and the Australian Defence Force. Australia’s response to Afghanistan was no different.

While Australia has made a substantial commitment to international operations in Afghanistan since 2001, it was not until April 2009 that we adopted a whole-of-government approach that saw a significant field deployment of civilian and policing expertise, alongside military personnel. This was the most war-like environment in which an Australian whole- of-government team had operated together in the field in the modern era.

As our mission in Afghanistan matured, the partnership between agencies, to deliver security, governance and development assistance, came to be highly regarded by Australian government civilian, police and defence force personnel alike. This experience fostered closer cooperation between government departments and agencies, and has given rise to new approaches to facilitate collaboration in response to international crises.

With the closure of the Provincial Reconstruction Team and Multinational Base Tarin Kowt at the end of 2013, we have had the opportunity to reflect on what departments and agencies learned from the way Australia managed its whole-of-government involvement in Afghanistan. This report highlights the strengths, good practices and challenges of Australia’s whole-of-government approach to Afghanistan and associated lessons.

As we consider these lessons, it needs to be acknowledged that the experience has been very particular, and in many ways unique. Even so, it is possible to distil lessons that can build on previous experience and that will assist decision-makers, policy experts, planners and practitioners, amongst others, in considering future whole-of-government responses to complex contingencies. 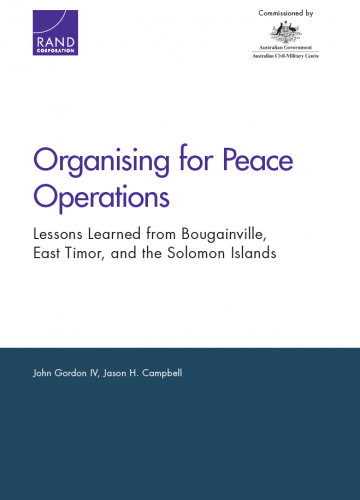 Lead Author/s
John Gordon IV
Identifying the organisational structures that were developed for each of three operations in Bougainville, East Timor, and the Solomon Islands.
Close